These scenarios are methods of securing someone without them having expressly consented to a scene. As such, it would be unethical to engage in these activities without some form of prior discussion. Personally, so long as someone were 100% certain they would not fail at implementing something below, so long as I was legitimately helpless I couldn’t possibly complain. Additionally, with enough force or adding tools like a shock collar, any one of these could be used to transition into one of the mindfuck or dehumanization scenes.


Mob Justice:
Random social kink environment. Ganged up on by however many guys it takes to subdue, even if using things tactics like stress points. Yelling met with either face slapping, various impact play, or literally forced gagging/hooding. Continually restrained using implements (handcuffs, leash, pinch collar, etc.) or grappling and forced to lick boots, mouth crotches through clothes, or similar service. Could also involve forced removal of clothes (to nudity if possible) and subsequent withholding of belongings pending good behavior. In this case “good behavior” would be restricted to very basic protocol like head down, arms behind back, lick boots when told, etc. 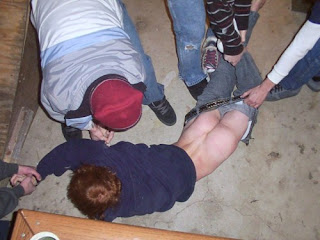 Panicked Transport:
Strapped into a bondage chair or similar rigid but movable setup. Ear plugs and heavy hood added forcibly while thighs, chest, and balls are slapped brutally to reaffirm how secure the setup is. At this point, get transported to another location and any attempts to protest are met with severe ball-beating. Once at new location, hood remains locked on and multiple people are there to subdue. 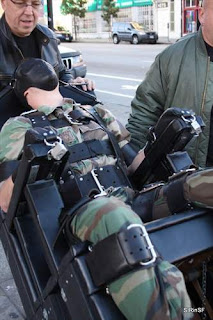 Pseudo-Kidnapping:
Set up something with a regular Dom for an “instructions at the door” scene. Instructions include inescapable bondage (tied to chair, chain locked to floor, hooded and cuffed, etc.) and ideally nudity or similar vulnerability. When someone finally enters the room can tell it’s not regular play partner and are unsure who. If instructions are resisted they proceed to forcibly restrain further and beat until followed, whether direct non-sexual service like foot worship or protocol-oriented like avoiding eye contact aversion. The stranger should have instructions that only light pain is acceptable when compliant. If dumb enough to yell for help or similar, gut punched or choked severely, or whatever it takes so yelling is impossible. Could be released with or without usual play partner making an appearance.

Regular Dom works with two of his local friends to convince you to meet new guy. Guy agrees to meet for drinks at his place. Second guy manages to sneak up and get pillowcase or loose hood over head, tightening it around neck. When trying to fight whatever has obstructed view, original person manages to quickly get rope around wrists (feeding bight between arms and chest, making quickly constricting loop for example). Any protest is met with gut punching, headlock, or other silencing means. Once this is done arms are pulled away from neck/face all the way to floor (can step on rope for leverage). Surprise person straddles and forcibly replaces pillowcase with proper hood, locking it on. 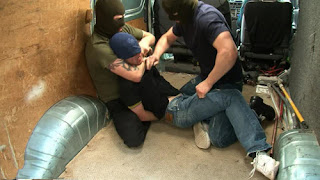 Using an animal control pole, noose, chain, or similar implement to control using neck vulnerability, exploited from behind quickly while distracted. Could either just be forced to obey simple eye contact/speech protocol or forced to lick boots and otherwise service non-sexually. Goal is to simply forcibly be removed from involvement in a social setting and to be unable to assert self back into said setting. 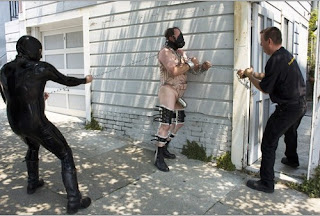