There was a photo of this guy that made the rounds on Tumblr and Facebook (the first one below) and I was absolutely captivated. Not only does he have an amazing physique, beautiful tattoos, and a charming smile, he seems to be a pretty cool guy based on his FB fan page. In the first picture, I was so stunned by how gorgeous he is that I didn't even notice he was an amputee. The next thing that crossed my mind was his tattoos, and that they seemed to encompass his entire body .. and that some of it was missing.

A lot of people only get tattoos for aesthetic reasons, but a good number of people get deeply meaningful tattoos. Some for lost loved ones, others for pets, I even knew a guy who did 100 mile runs  (yes, 100) and would get a tattoo for each successfully completed one. When you get a tattoo like that, it's something meaningful becoming a part of you forever. Except in instances like amputation that could rob you of something immeasurably important. At that point you're not just losing a limb, you're losing a piece of art, and a symbol you cared deeply enough to essentially carve into your body. I can't help but wonder if what he drew on his prosthetic foot (last photo) is what was originally tattooed on that foot.

At any rate, it was an interesting thought which had never even crossed my mind until I saw that pic. On top of that he is seriously one of the most beautiful men on the planet, so here are some photos courtesy of his FaceBook page - and of course the respective photographers.

Oh, and in case you don't notice on your own: this dude's so hardcore he has a tattoo in his fucking armpit. 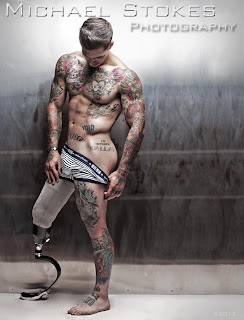 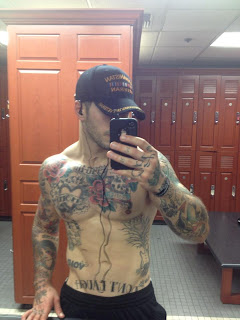 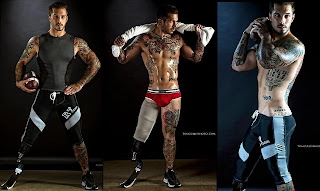 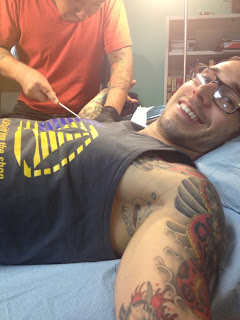 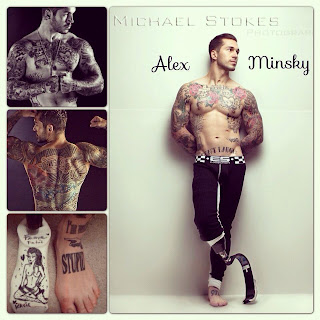